This week we remember the words of Dr. Martin Luther King, Jr., in his I Have a Dream Speech, “When we let freedom ring, when we let it ring from every tenement and every hamlet, from every state and every city, we will be able to speed up that day when all of God’s children, black men and white men, Jews and Gentiles, Protestants and Catholics, will be able to join hands and sing in the words of the old spiritual, Free at last, free at last. Thank God Almighty, we are free at last” (1963).

Since the beginning of time, people often could not reconcile themselves with each other due to a host of man-made barriers to unity. Gods’ grace runs counter to worldly obstructions, though, unconfined to these hindrances. — Neither race, nor ethnicity, nor age, nor gender, nor origin, nor economics limit access to it. Christ’s death, burial and resurrection brought freedom from the darkness of sin over 2,000 years ago. I thank Jesus Christ, the Almighty God, that as believers we are free! “For if while we were enemies we were reconciled to God by the death of his Son, much more, now that we are reconciled, shall we be saved by his life” (Rom. 5:10 ESV).

His light shines into the cracks and crevices of darkness that separate the elect from reconciliation. Galatians 3:28 says that, “There is neither Jew nor Greek, there is neither bond nor free, there is neither male nor female: for ye are all one in Christ Jesus” (KJV). The Light shines the way to salvation for His chosen, even for those who society deems as the excluded. One example of how God’s grace transcends governing rules can be found in Jesus’ encounter with the woman at the well and His subsequent opportunity to deliver the salvation message to the people in Samaria. Let’s take a look at how Jesus freely offered Himself as the Messiah to the Samaritans, a people who the Jews despised. Historically, Jewish and Samaritan held divided relationships with strong racial and religious tensions.
JESUS INCLUDES THE EXCLUDED. 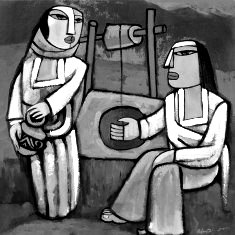 A Story of Inclusion: The Samaritan Woman at the Well

Jesus and His disciples leave Jerusalem and travel to Galilee, taking the shortcut through Samaria. They arrive in Samaria at high noon. Jesus stops in Sychar. Feeling wearied from the journey, He sits by Jacob’s well. His disciples continue to a nearby city to buy something to eat. (John 4:3-8).

The story continues. Now, a Samaritan woman comes to the well to draw water. Most likely they were alone. The disciples were in search of food, and women customarily went to the well in the morning (4:8).

Jesus asks her for water. This action is unthinkable, even shocking, for Jews. The Samaritan herself is surprised by his action. “How is it that thou, being a Jew, askest drink of me, which am a woman of Samaria? for the Jews have no dealings with the Samaritans” (4:9).

Jesus’ dealings with the Samaritan woman at the well provide an interesting glimpse of salvific access to grace as it interacts with ethnicity, religion, gender, economics and political morays found in New Testament social order. In this instance, Jesus architects salvation’s parameters by illustrating there are no boundaries to the extension of grace.
He broke a number of Jewish taboos with the encounter as a whole such as those dealing with religion, race, social strata and gender. It’s interesting that many of these taboos are relevant in part today.

These so called taboos did not separate Jesus from the woman. As with other occasions, when Jesus met with people on the margins, He focused on the harvest. He carried on with the dialogue.
JESUS INCLUDES THE EXCLUDED.

His request for water was not the point on the conversation…Jesus had water to offer her, living water, eternal life that’s only available through Him. The woman does not fully understand at first. Perhaps she’s surprised that He discloses she had five husbands and lives with a man not her husband. She questions Him, and then realizes He is the Messiah (4:13-26)
JESUS INCLUDES THE EXCLUDED.

The woman returns to her town and invites the people to “Come, see a man who told me all that I ever did.” (John 4:29 ESV) She evangelizes to others.
JESUS INCLUDES THE EXCLUDED.

After Jesus speaks to a Samaritan woman, He now has opportunity to include a greater population into the message of grace and living water of eternal life. Jesus stays with the Samaritans for two days and teaches them about the Kingdom of God. John 4:42c says that when Jesus left, the people told the woman, “we have heard for ourselves, and we know that this is indeed the Savior of the world.”
JESUS INCLUDES THE EXCLUDED.

The Call to Become of One Heart and Mind

Neither pray I for these alone, but for them also which shall believe on me through their word; That they all may be one as thou, Father, art in me, and I in thee, that they also may be one in us: that the world may believe that thou hast sent me. And the glory which thou gavest me I have given them; that they may be one, even as we are one: I in them, and thou in me, that they may be made perfect in one and that the world may know that thou hast sent me, and hast loved them, as thou hast loved me.

This passage highlights the concept of oneness of believers. Christ prays that the redeemed would unite as one according to the Father’s will. The word one (εἷς Gr.) appears five times in this passage, transliterating from Greek as heis and meaning the numeral one. I was intrigued by the frequency count of the word one in these verses, so I searched online for its significance. My research took me to mathematical rules, in which I learned about the power of one. — Regardless of how many times you multiple one times one, it still equals one. This rule can be applied to the context of John 17:20-23. When the unified body of Christ repeatedly multiplies itself, it still equals the body of Christ. The body, as one, holds the same constant properties of Christ dwelling within us. This enables the body to live out the power of one, multiplied the world over, as a living witness of His light.

The role of every Christian is to harmonize one’s purpose with God’s will to bring others into this same oneness. When the body of Christ acts as one heart and mind, then it joins together in one accord. — As Apostle Paul said to the church of Philippi, be likeminded, “having the same love, being of one accord, of one mind” (Phil. 2:2).

As members of the Christian community, we must take stock of our mission to bring the message of the Gospel, words of freedom found in Christ Jesus, and open access to the salvation message to the multitudes of humanity. Taking from what is learned from Jesus in Samaria, do we love God’s people the same way He does? Jesus commands “That ye love one another; as I have loved you, that ye also love one another” (John 13:34). I ask whether this is genuine or topical. When we gather in worship, do those around us represent the rich tapestry of His people? Jesus is the light of the world (8:12). The act of loving one another epitomizes the culture of inclusion in the body of Christ and, thus shines His light where people need to be free. Is there anyone we need to include today?

Carson, D. (n.d.) Who were the Samaritans? Retrieved January 12, 2012, from http://davcarson.home.mindspring.com/Intertestamental//samaritan.htm

King, Jr. (1963). “I have a dream speech.” American rhetoric: Top 100 speeches. Retrieved on January 16, 2012, from http://www.americanrhetoric.com/speeches/mlkihaveadream.htm

Plummer, R. The Samaritans in Flavius Josephus(Studies in Ancient Judaism)

Womeninthebible. (n.d.) Samaritan woman: Her story. Retrieved on January 13, 2012, from http://www.womeninthebible.net/ 2.8.Samaritan_woman.htm# What the story is about