For 40 days following His crucifixion, Jesus appeared to His followers alive from the dead. While they could not come to grips with His recent and senseless death, He revealed Himself alive beginning an exclusive ministry lasting until His ascension to heaven. On more than one occasion, He confirmed His resurrection with infallible proofs demonstrating its reality and power (Acts 1:3 KJV). Jesus moved His followers from the spectacle of His death to a life of power and ministry with confirmation, revelation, instruction, and commission. His followers’ post-resurrection experiences with Him prepared them for His departure, outpouring of the Holy Ghost, formation of His church, and proclamation of the Gospel (1:8). Prior to His ascension, Jesus addressed issues prohibiting the apostles outreach with the Gospel: their abandonment of Him on the eve of His death, fear of a subsequent execution at the hands of the Jews, significance of His death, and His death’s relationship to the Old Testament. Christ transformed His followers into a powerful group of witnesses who would turn this world upside down. By transforming His followers, Jesus exemplifies true ministry through life-changing encounters that give revelation of His identity and will. It provides a new place and purpose in His Kingdom for all who come to Him. 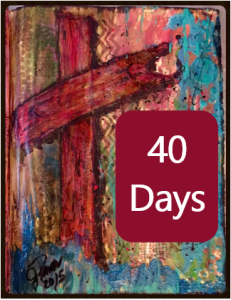 Jesus eliminated the hopelessness and fears of His followers by imparting peace to them, confirming His resurrection, reaffirming their apostolic calling, and speaking to things of the Kingdom of God  (John 20:19; Acts 1.3). Their fears of an impending execution vanished. Not only His apostles, but family, and many friends and associates who witnessed His crucifixion, beheld Him alive throughout this period (1 Cor 15:1-8). Additionally, He explained how His death and resurrection changed the relationship dynamic between God’s Kingdom and humanity. Scripture proclaims two phases of God’s kingdom: one in which Christ rules all earth’s nations in resurrection glory (messianic; Rev 11:15) and another wherein He redeems humanity from sin and death through His shed blood, restoring them to a new relationship with God by rebirth (redemptive; Luke 24:46; John 3:5; Col 1:12-14).

Jesus acknowledged this new covenant relationship to Mary Magdalene just as He was about to ascend to the Father’s presence with His blood. This ascension occurred prior to His first appearing to the disciples (John 20:17). He was ascending to their God and Father to obtain humanity’s eternal redemption as sons (20:27) [1]. God in Christ now becomes a believer’s God and Father by new birth. God making Himself in the likeness of men reveals the significance of this ascension (John 1:14; 2 Cor 5:19). As Scripture’s central truth, God in Christ unites its more advanced truths revealing salvation’s manifold dimensions. This was not His ascension to God’s right hand, but His human priestly entrance into God’s presence with His shed blood to remove sin and obtain redemptive rights to everyone for whom He died (Heb 1:3-4; 9:11-12). As God  is omnipresent [2] both in heaven and manifest (incarnate) in Christ, Jesus with His own blood sprinkles God’s throne to purge humanity’s sin from His presence making it a throne of grace for all (Heb 4:16; 1 Pet 1:2). Based on humanity’s response to the Gospel, this becomes a life application. Furthermore, God’s omnipresent Spirit, both in Christ and upon heaven’s throne, received His blood sacrifice for sin allowing Jesus to claim everyone as children by His Spirit (Rom 8:9; Heb 2:10-15). From the union of God and Christ (man) by incarnation [3], Jesus through Scripture now calls all believers both His children and brethren [4].

Next, Scripture says Jesus presented His followers with infallible proofs–undeniable and unmistakable signs. These proofs removed all doubts Jesus still was dead. Initially, the disciples did not accept the testimonies of Mary Magdalene, Joanna, Mary mother of James the less, Salome, Cleopas, and one other. The disciples’ mistaken disbelief in His resurrection changed when they beheld Him resurrected. Eight days following His initial appearing to His disciples, Jesus returned and allowed Thomas to touch and examine His physical body. With renewed faith, he called Jesus Lord and God (John 20:27-28). Jesus’ resurrection established His earlier claims to be the Son of God with certainty, also it served as the confession and foundation of His church (Rom 1:3-4). Jesus affirmed Thomas’ faith, because he just as the other disciples, saw Jesus. Those who believe Scripture’s witness will receive His blessing–eternal life by His indwelling Holy Spirit. By resurrection, Jesus conclusively showed He was Lord and God of all abolishing sin and death’s power over humanity thereby demonstrating His ability to forgive and deliver all from every bondage of sin and its consequences. His resurrection alone proves the superiority of His Gospel preached by the apostles.

Then, Jesus appeared again to the disciples and commissioned them to preach. This time He gave them the key to fulfill His commission–follow Him. Christ transforms those who follow Him so they can mentor others in discipleship (John 21:1-19). Christ’s calling and way of life brings maturity and fulfillment of God’s purpose to His followers lives. It teaches them to relate to God and man properly.

Prior to starting His Galilean ministry, Christ told Peter and His brother Andrew to “Follow me, and I will make you fishers of men” (Matt. 4:19). For three and a half years they saw Christ’s miracles, heard His teachings, received apostolic appointment, and on private occasions witnessed signs above those seen by the populace. On this post-resurrection occasion, as Peter and seven other disciples fished into the morning, Jesus standing upon the shore questions their expedition’s result. Unaware to Whom they were speaking they answer Him no. Jesus instructs them to cast their net on the other side leading to a great catch. At this moment, they recognize the stranger as Jesus. He then questions Peter’s loyalty during a fellowship breakfast at the shore, “Simon son of Jonas, lovest thou me more than these?” (John 21:15-19).  Peter considered each question in light of his abandonment and three denials on the night of His arrest. Answering with affirmation, he qualified each response saying “Lord thou knowest that I love thee.” Grief stricken, Peter responded a third time “Lord thou knowest all things.” Considering his love for Christ and knowing Jesus was no longer dead, Peter’s heart filled with grief (Greek: sadness). Peter then understood Christ’s love for him, personal failure and responsibility to feed Christ’s people.

In wake of failure, believers must consider their love for Christ, which leads to rededication of their lives to Him. Repentance and confession result in a cleansed spirit and refreshed walk with God. His calling exceeds human failures, and His death ensures its fulfillment. Jesus’ attitude towards Peter reaffirms His preeminent calling over His followers lives and fruitlessness of life without Him. Peter and his colleagues received a renewed purpose with Christ. Only this time, He was going to live and work in them by His Spirit. With knowledge and understanding, a church’s ministry leads its converts to maturity and closer fellowship with Christ. True ministry proclaims and expounds God’s Word to all producing mature believers who will impact this world for Him.

Remembering His love for Jesus allowed Peter and the other disciples to move beyond their failings in Gethsemane to walk with Christ. His death was the answer for their failure, and His resurrection changed their future. Christ’s blood removes all humanity’s sin upon repentance through water baptism in Jesus name. So, what constitutes true ministry? First, true ministry leads its recipients to receive salvation (Acts 2:38). Repentance results in receiving the Holy Ghost and transformation. When filled and renewed by the Holy Ghost, believers will carry out God’s will with dedication (2 Cor 5:17-21). Second, ministry reminds believers of their new identity in Christ along with their purpose and responsibility to fulfill it. Believers must ever be mindful of this privilege. Being filled with the Spirit establishes a new covenant relationship with God allowing Him to will and do of His good pleasure through them (Phil 2:13). Third, God working in His people to fulfill His goodness towards humanity exemplifies ministry. His heart seeks to reach the lost through believers. Those who make themselves available to God will find themselves used by God.

Finally, Jesus brought His disciples to a place of examination, reconsideration, and remembrance to prepare them for ministry ahead. His question, “lovest thou me?” calls for self-examination for if His followers love Him, then repentance and rededication likely will follow. Peter knew he loved Jesus. He only needed reminder and redirection. Following the disciples’ baptism with the Spirit, they changed their world for Christ. Do you love Jesus? When believers make the choice of repentance and recommitment, they can live for God with power and dedication.

A transforming encounter with Jesus Christ births a new relationship with God and gives a new direction for life with dedication. Christ’s filled His 40-day ministry to His disciples with signs, instruction, and commission preparing them to preach the gospel. These signs were of a different nature. They were acts beyond healing and deliverance that established His resurrection and identity. As followers of Christ, they received experiences and teachings with Him beyond what the multitudes experienced. Discipleship blessings enrich our relationship with God while multitude blessings meet needs. While physical blessings are great, seeking and knowing Jesus brings blessedness and purpose. When the disciples renewed their faith in Him, Jesus strengthened them in knowing He was Christ, the Almighty God in flesh. This essential knowledge flowed throughout apostolic teaching and preaching. It made His crucifixion along with its disgrace glorious and powerful. Today, Christ’s death and resurrection stands as God’s ability to save to all who believe His message of salvation. New Testament ministry becomes effective by its proclamation and worship of Jesus Christ. Using New Testament ministry, God transitions both His people and the lost from life shaking events to Christ changing moments and dedication.

[1] On the Jewish feast day of atonement, following the death of the chosen goat, the high priest entered the holy of holies sprinkling the mercy-seat with its blood renewing the relationship between Jehovah and Israel. During this time, no one ministered in the tabernacle. If someone interrupted or touched the high priest, it rendered his sacrifice ineffective. This explains Christ’s words to Mary in not touching him (Lev 16:17).

[4] Christ’s death was a redemptive intercession for everyone. It became active when He entered God’s presence and purged sin with His own blood to remit sin at baptism and the outpouring of the Holy Ghost. This act continues as intercession for both saints and sinners today (Heb 7:25).