The biblical testaments harmonize together into one united narrative of which God revealed His identity and salvation plan to all humanity. Scripture interprets Scripture as its own testimony—It reveals a completely Spirit inspired, inerrant, infallible, and authoritative text. The Word of God contains guiding truth for a believer’s walk. Students of the Word exegete and interpret Scripture to unlock its meaning. Against the backdrop of scriptural exegesis and interpretation, the meaning of servant of the Lord comes forth.

Exegesis answers the question, What did the biblical author mean? Tate (1997) defined exegesis as the process of examining a biblical text for what its original readers understood it to mean in a given context. In doing so, it considers the grammatical aspect of word meaning (lexicon) and order (syntax) looking at relationships for meaning.  Words or phrases take on various meanings depending on the author’s intent. Additionally, exegesis examines the historical-cultural aspects through biblical geographical, social, political, archeological, political, cultural, philosophical, and religious views or events from the time of writing (Bernard, 2005). Working in tandem with exegesis, Tate (1997) explained that interpretation draws out implications from the text for contemporary readers and listeners. Interpretation depends on thorough exegesis combining grammatical and historical aspects with illumination from the Holy Spirit for understanding. The Holy Spirit does not contradict His own Word, rather reveals meaning.

Two words surface when mentioning the concept of Christ-centered servitude in the New Testament: diakonos and doulos. This author (2013)  wrote that a diakonos servant (Matt 20:26) shows the qualities of a minister who seeks nothing more than unselfish ambition to God’s service as His subordinate in all humility, love, and submission. Further, a servant waits on and carries out the commands from the King: “The greatest among you will be your servant” (Matt 23:11). Working with diakonos, a doulos servant (Matt 20:27) revealed a bondservant who gives up self-interests and will to advance God’s mission as a slave for the sake of Christ. This enslavement brings joy, devotion, obedience, yielding, and sacrifice: “Sitting down, Jesus called the Twelve and said, ‘If anyone wants to be first, he must be the very last, and the servant of all’” (Mark 9:35). Christ followers must hold the beliefs and show the actions of both diakonos and doulos. A third word, pais (Greek), gives even deeper meaning into the subject of servitude. Thayer (2009) defined pais as one whose “agency God employs in executing His purposes: “Behold my servant, whom I have chosen; my beloved, in whom my soul is well pleased: I will put my spirit upon him, and he shall show justice to the Gentiles: (Matt 12:18 KJV; Isa 42:1). This passage fulfilled what the Prophet Isaiah foretold about the coming messiah, Jesus. It also precedes diakonos and doulos in the Book of Matthew and announces the reason behind servitude (Matt 20:27; 23:11). To understand servitude, What do the first mention, typical, and context principles uncover about the characteristics of a servant of the Lord for believers in Christ?

Hartill (1947) stated that the first mention about a subject comes from God about truth related to a subject that stands connected in His mind. The first mention of servant (Hebrew: עֶבֶד`; ebed) occurred in Gen 26:24, in which God referred to Abraham as His servant: “And the Lord appeared unto him the same night, and said, I am the God of Abraham they father: fear not, for I am with thee, and will bless thee, and multiply thy seed for my servant Abraham’s sake.” A critical point about the name servant of the Lord relates to the fact that the God Himself identified Abraham as His servant and did so in a possessive form, “my servant” (26:24b). Scripture showed that Abraham followed God’s will by leaving Haran to follow the Lord’s command to go to a land God would show him (12:1). Ancient peoples held land, family, and inheritance as significant elements in their society. Land sustained a farmer’s livelihood, while it represented the urban dweller’s political identity. Children inherited the family land. They worked it to sustain their livelihood, care for their family, and ensure the family lineage. The land, family, and inheritance linked together (Walton, Matthews, & Chavalas, 2000). When Abraham left his father’s house and kindred upon God’s command, he forfeited everything familiar from Haran to go “unto a land that I will show thee” (Gen 12:1d). Instead, he placed his future in the Lord’s hands and followed Him. For the Lord to name Abraham servant brings to mind characteristics of obedience, submission, trust, and faithfulness. These traits tied to God’s covenant and resulted in Abraham gaining a new identity, everlasting inheritance, and divine security.

What does the study of servant of the Lord’s context further determine about its characteristics? The context principle considers a subject through the context of the immediate passage, chapter, book, testament, and Bible (Hartill, 1947; Segraves, 2001). Words, phrases, or passages before or after a word influence its meaning, too, as do surrounding events, conditions, and audience. For example, servant of the Lord first appears in Gen 26:24. The Lord appeared to Isaac and reaffirmed the covenant He made with His servant Abraham. The passages prior to verse 24 open more understanding about servant of the Lord.

A look at the chapter revealed that events occurred at the time of famine. God directed Isaac to sojourn temporarily in Gerar. There, the Lord appeared to Isaac and told him He would favor him, give all these lands, and confirm the oath He swore to his father Abraham (26:3-5 NIV). He emphasized that Abraham obeyed Him; did everything He required; and kept His commands, decrees, and instructions (v. 3). The Lord spoke again to Isaac in Gen 26:24, “I am the God of Abraham thy father: fear not, for I am with thee, and will bless thee, and multiply thy seed for my servant Abraham’s sake” (KJV). Earlier verses from chapter 26 showed that the Lord’s servant Abraham had an obedient character based on His actions.

The context principle indicated that a servant of the Lord belonged to the divine Master, rather than a worldly (Gen 24:2). A servant of the Lord carried an exalted stature, honorable in God’s eyes rather than dishonorable (2 Kgs 8:13). God esteemed the title, rather than the respect people gave men of war (1 Sam 18:5). The title transcended a polite address (Gen 43:28). This servant voluntarily submitted to everything God required and kept His commands, decrees, and instructions. God did not force obedience (49:15). Further, the servant carried out the Lord’s requests based on faith in God’s covenantal promises for Israel, generation to generation. The Lord’s scope of authority went beyond that of a master’s household (24:2) As opposed to the cursed servant of servants (9:25; 26:15), the Lord blessed His servant with ensuing spiritual and physical prosperity.

The typical principle pertains to a type from the Old Testament that clearly revealed itself in the New Testament to show a divinely appointed illustration of some scriptural truth (Hartill, 1947; Segraves, 2001). Continuing to follow occurrences of servant of the Lord, the most significant presents itself in Isa 42:1-8. The unidentified “my servant” type in Isa 42:1, prefigured the antitype Messiah: “Behold my servant, whom I uphold; mine elect, in whom my soul delighteth; I have put my spirit upon him: he shall bring forth judgment to the Gentiles” (Isa 42:1). Jesus Christ, the Lord’s Servant fulfilled these words foretold by the Prophet Isaiah in Matt 12:18. In this prophecy, God assured the helpless servant Israel that He will bless them through His Servant to come Who will rule over the earth (Isa 42:8-9). His servant will bring justice, a divine mishpat, to the nations with salvation (42:1, 3-4). He will do so gently in truth: Neither will He break a bruised reed nor quench a smoking flax (v. 3). But, He will prevail in establishing it. Isaiah 42:4 in the Amplified version detailed the meaning of establish, “He will not fail or become weak or be crushed and discouraged till He has established justice in the earth.” 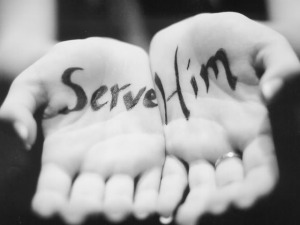 Seeking the Pillars of Truth

The Bible is the Word of God with truths for daily living. These truths provide each believer and the collective Body of Christ with subsequent meaning that shapes their understanding for God’s intentions as His servant. It also beacons their walk with guiding principles to serve Him. What truths, then, did God have in mind about servant (Hebrew: עֶבֶד`; ebed) in Gen 26:24? Think of the following pillars as the answer to this question. These pillars of truth apply to Christ followers as His servant, His beloved:

God exalts His beloved with the title servant: The Most High bestows them with a name of honor. With this title, though, comes responsibility. Every believer must journey in faith like Abraham and walk as the Servant Jesus to promote the cause of the Gospel to all nations. It takes nothing less than faith and trust in God to serve. Heed the Lord’s words to Joshua, “Have not I commanded thee? Be strong and of a good courage; be not afraid, neither be thou dismayed: for the Lord thy God is with thee whithersoever thou goest” (Josh 1:). Submit, follow, trust, and prevail in faith as a servant of the Lord.

2 thoughts on “Uncovering the Meaning of Servant of the Lord”